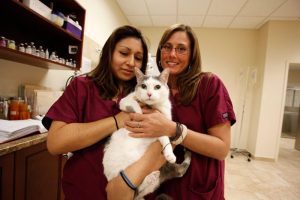 Serving Long Island and Queens for over 65 years.

The hospitals founder, Dr. Robert Ferber developed his love for animals as a child by spending time in one of the many horse stables present in Flushing at that time. After graduating from City College in New York, Dr. Robert followed his dream to become a veterinarian. Upon graduating from the college of veterinary medicine in 1939 at Cornell University he opened the North Shore Animal Hospital in Bayside. In 1942 Dr. Robert closed the hospital to serve in the US Army Veterinary Corps. After finishing his tour of duty with the Army he re-opened the hospital in 1946.